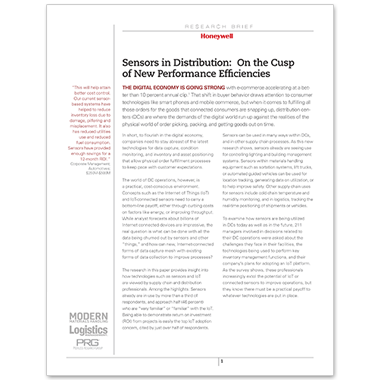 The digital economy is strong with e-commerce accelerating at a better than 10 percent annual clip. That shift in buyer behavior draws attention to consumer technologies like smart phones and mobile commerce. However, when it comes to fulfilling orders for goods that connected consumers are snapping up, distribution centers are where the demands of the digital world run up against the realities of the physical one.

In short, companies need to stay abreast of the latest technologies to flourish in the digital economy.

Industrial and warehousing facilities use wireless technology as their primary Internet protocol. In fact, roughly three-fourths of those surveyed manage or plan to run Wi-Fi-based applications. They also use Ethernet-based networks for transferring large amounts of data and sending information requiring a higher security transmission.

Organizations are predominantly using barcoding solutions and handheld systems for their data capture applications. In addition, roughly one out of four also now use sensors, forklift computers or RFID technologies. Yet, distribution center managers feel that using barcode scanners and imaging technology, RFID systems and handhelds would increase accuracy in inventory and fulfillment data. Those surveyed see value in continuing to invest in traditional data collection solutions alongside growing interest in newer technologies such as RFID, sensors and voice picking.

However, costs for implementing, operating and maintaining warehouse technologies loom as the largest hurdle.

While usage of sensors is not yet mainstream, distribution center managers are thinking about them

Slightly more than one out of three of those surveyed currently use sensors in their DCs. In addition, one-fourth say that while they’re not presently using sensors they expect to implement sensor based applications during the next two years. Interestingly, over one-third claim that they have no plans to adopt sensors at the present time.

Peerless Research Group offers a wide range of custom and research solutions. Find out how we can help you.